How to understand Intergenerational Leadership – an overview of the four generations

Leading a team has just become a bit more challenging with now 4 – soon 5 – generations in the workplace. So how do you motivate every generation and involve everyone in the same task when each generation responds different? Studies show that the greater the generation diversity, the lower the overall engagement is in workplaces.

Workplaces consisting of 4 to 5 different generations, requires managing challenges within culture, ideals, values and practices. Generation diversity is expanding, and differences between generations is a part of our modern workplaces. The speed in which we live our life is faster than ever before – and companies needs to stay relevant. This requires understanding the people we have in our organizations. Having 4 different generations in the same workplaces, means having four different views at the same challenge.

Generational diversity may lead to unhealthy work environments, leaving it to managers to contain the organizational damage. Therefore, it is important for managers to understand the communication style for every generation.

Well, for several reasons. Firstly, because generation Z will represent 20 percent of the total workforce by 2020. Only four years later, by 2024, about 25 percent of the workforce will be people over the age of 55.

As Erik Korsvik Østergaard, one of our founders, likes to mention/point out: “Both my dad and my son may work at the same workplace within a matter of few years.”

What does this mean? Yes, getting these groups of different generations to work together efficiently can be challenging – but also very exciting. The DNA of a successful organization is embracing diversity of people and ideas, building trust and re-thinking existing ways of working.

To manage different generations, you must understand the characteristics of them. Knowing this, helps you – the manager – bringing teams together and create organizations where people want to show up.

Personal development and a pizza slide

Every modern organization has teams with four roles distributed among team members. The four behaviors in the roles are: business oriented, delivery/discipline oriented, people oriented/interpersonal skills, and specialist oriented/professional skills. We call this ‘the Pizza Model’. Working with people across generations allows teams to operate in a broader sense within all the pizza slides.

The four generations in the workplace

Each generation has their way of working. Therefore, it is important to understand the typical characteristics of the different generations. Let me introduce you to the generations that you may meet in the workplace today: 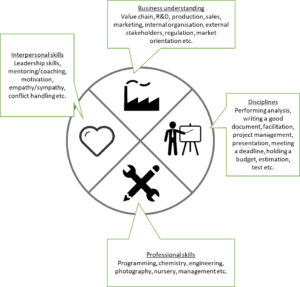 You can always point out typical characteristics for each generation, but always be aware that environment and culture play a role in how individuals behave. For example, I could easily point people out, who are born in the Generation X period and point out a typical characteristic. But being influenced by culture, the environment and social trends, may have left impact, which means they act as Baby Boomers. These descriptions should therefore be considered as general trends. 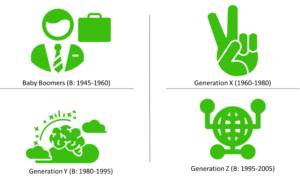 The baby boomers are also known as the me-generation, and represent one-third of the current population. They grew up in a competitive time after the world war 2, and more than often, they are doing their job out of desire to do better for themselves. Bigger is better for this generation, which is also why many boomers delay their retirement. They are also known as the last to leave the office. It is a generation where there is a high degree of independence, and money, titles and power are key drivers. It is a generation that wants to be honored for their experience and these people wants to be asked – not told. They build, they express themselves through their experience and wants to get acknowledge for their legacy.

Generation X represents about 20 percent of the world’s population. Approximately 35 percent American generation X’s have a bachelor’s degree, which means they hold more powerful positions in organizations than other generations. They have seen their parents devote their life to work, which is mainly why they want development – also in their personal lives, which is why this generation invented the work-life balance. They tend to be more adaptable and want to get recognized for their educational skills. They are driven by fewer roles in organizations, flexibility combined in a work-life balance, speed and creativity, and they are the ones asking the why-questions. They get bored by the long feedback that baby boomers tend to give, so fast feedback is key.

This is the internet generation, and they are not to hung up on talking face-to-face. They grew up when internet was introduced as a natural part of our lives, and everything has moved fast – even themselves. They represent 20 percent of the population, and they were raised in a time where teaching in school turned into focus on self-esteem – so expect a generation with self-esteem on steroids. They are great at multitasking, and social interactions and changes are key drivers. Their work ethics are driven by social interactions, they want to get recognized for everything because that was how they got raised. Collaboration with their managers are important and keeping them busy and having multiple jobs going on is the way. Pay checks? They need to match their interests outside the office. Generation Y are optimistic, they tend to trust more, they are fully transparent and thinks in terms of action.

Generation Z, also known as the I-generation, represent more than 20 percent of the population. These guys are born in the digital age. Smartphones, social media and Netflix was a part of their childhood. Streaming answers are the way they prefer receiving information they need. This generation is driven by purpose driven work environments, and learning is essential for them in a work environment. Growing up with a smart phone and in a digital age, they fear being alone. They prefer – like generation Y – to have shorter conversations, where they can reach out for their phones for fast information.

There are three things you need to be aware of

So, what can we learn from the general tendencies? We can at least make ourselves aware of three things:

Not only is the world constantly changing, so are the people living in it, and so are organizations. Therefore, we will dive into intergenerational leadership for the next couple of months, providing you with tools, reflections and blogs about how to lead and manage intergenerational diversities in your organization.

Try it now
Inspired? Buy the book The Responsive Leader!

The Responsive Leader is a book on how to be a fantastic leader in a constantly changing world.

How to lead across generations Scroll to top